The 1860 Chace map of Moscow, Maine shows the location of Dresser Hill, which was  better known, earlier and later, as Chamberlain Hill. The names come from families who settled there in Moscow’s early days. Moses Chamberlain and his sons settled around 1820. The Dresser family came and went quickly during the 1830’s and 1840’s, but some of their Moscow land remained in the family for many years.

Moses was the son of John and Mary (Patch) Chamberlain of Pepperell, Massachusetts, who moved up the Kennebec to Embden by 1790. According to Ernest Walker’s Embden, Town of Yore, Moses, a Revolutionary War soldier born at Pepperell, Massachusetts was the first settler on the hill in 1818. That date may be a little too early. He first settled in Solon and it appears that he lived there at least until 1820, when he was listed in the Solon census. His residence was also given as Solon on his pension application dated June 1820. He began advertising his Solon farm for sale in local papers in the spring of 1819, suggesting that he was planning to move.

The FARM contains 196 acres of good land, 190 under improvement—with a good House, one story high, 36 by 30, well finished—A good Barn 55 by 30, almost new—with Shed corn-house, and hog-houses adjoining it—together with a young orchard bearing 20 bushels of apples yearly, and a good well of water. All very pleasantly situated—Said Farm will be sold very cheap, with a small part of the purchase money down.—For further particulars, enquire of the Subscriber, on the premises, or of Amos Fletcher Norridgewock.

John Black surveyed the settlers of Moscow in September 1820 in preparation for arranging sales and deeds. Moses Chamberlain and his son Joseph were named in that survey, with adjacent lots reserved. Black’s record of sales in the Million Acres includes an entry for Moses Chamberlain’s bond to purchase the south half of Lot 8, Range 4 on the hill in 1824. He paid for his land entirely by working on the roads, completing payment in 1829. His son, Neri, purchased Lot 8, Range 5 near his father from John Black in 1829. Neri left the area quite early and became a pioneer at Austin Texas, where he is known to have bought land in 1839. Moses’s son Joseph married Comfort Tarlton, widow of Abraham Dore of Bingham, who died in 1833. Joseph lived for a while near Moses on the hill, and later moved to Massachusetts to live with one of Comfort’s children.

Moses’s first wife was Mary Baker, daughter of Joseph and Dorcas (Smith) Baker, first settlers of Moscow. She died about 1830, and Walker says she was buried on Chamberlain Hill with only a rock marker. They had ten children, all born before they moved to Moscow.

Moses’s second wife’s name was Anne; her maiden name has not been found. She moved to Norridgewock after his death, where she applied for land grant compensation as his widow.  According to her deposition for the grant, Moses died December 9, 1833. A newspaper notice of his death read; “In Bingham on the 9th inst., Moses Chamberlain Esq. aged 72 years—a revolutionary soldier, and grand-son of the celebrated John Chamberlain, who slew Paugus, the Chieftain, in Lovell’s Fight.”  Moses is buried in Bingham Village Cemetery. 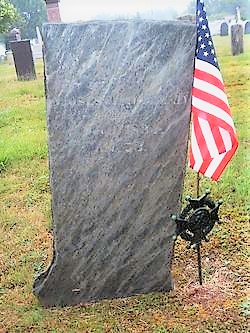 In December 1834, Moses Chamberlain^ sold the south half of his lot to William A. Dresser of Buxton for $725. William was the son of Mark Dresser and Nancy Jane Holbrook. He married twice. His first wife was Jane Boulter, by whom he had daughter Charity and son Mark. Jane died in 1847. His second wife was Jane’s sister Charity Boulter, by whom he had a son, Alfred, and three daughters.

Wentworth Dresser of Limington, William’s brother, bought Lot 7, Range 4 in Moscow from Edward Chase on April 9, 1835. At the same time, he mortgaged the property to Julius Baker of Moscow. The lot straddled the road through the top of the hill. Wentworth’s wife was Sally Stevens, perhaps related to the early Stevens family in Moscow. Wentworth and William Dresser both appear in the 1840 Moscow census.  Asa Dresser, an uncle to Wentworth and William, was part owner, with several other Portland businessmen, of three quarters of the township of Elliottsville, which he sold to his son Alfred in 1839.

In 1838, Wentworth mortgaged his property to William Rowell of Bingham. In 1848, Rowell began the foreclose process due to breach of the agreement. For the sum of $400, probably in payment for the house and building improvements on the property, Dresser peaceably gave up his property to Rowell. His family then moved to Brunswick.

William Dresser, though he lived in Bangor by 1850, continued to acquire land in Moscow. In 1849, the Town of Moscow sold him 65 acres from the public lot on the hill.  After his death in 1880, his executor sold several parcels to William’s son Alfred M. Dresser for $200.  These included property “formerly known as the Bradley Farm,* the eastern 3/4 of the west half Lot 8, Range 3, and 100 acres being the eastern half of Lot 11, Range 4. The 1883 Colby Atlas of Somerset County shows a lot of land on the hill assigned to the Dresser Estate. It covers the north half of Lot 7 and the south half of Lot 8 in Range 3. Alfred owned the land until 1899, when he sold his holdings to his brother-in-law Clarence S. Bradbury of Portland. 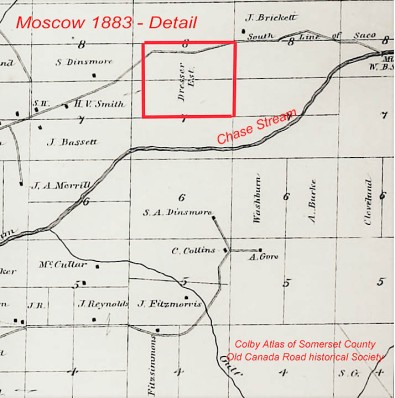 Chamberlain Hill was used to pasture horses used in logging operations, as the photo below illustrates. There was a house on the hill for some time into the 20th century, but is no longer standing. 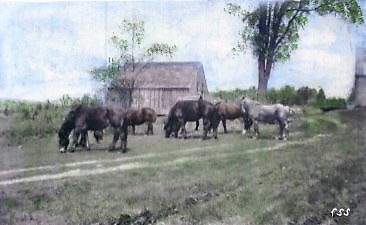 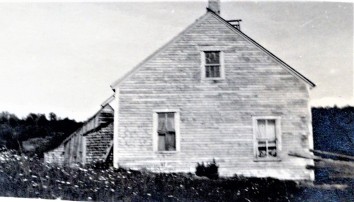 In the 1970’s the Air Force constructed a backscatter radar station at the top of Chamberlain Hill.  The technology was soon obsolete, and the array has since been removed. 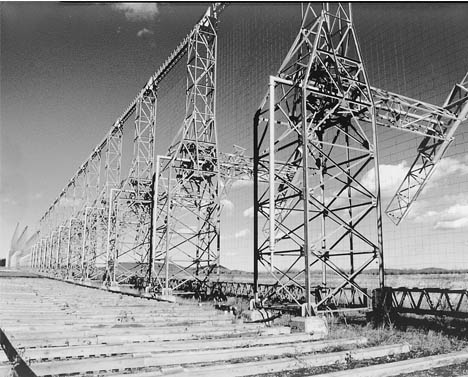 ^Presumambly, it was Moses Chamberlain, Jr. and his wife Mary who made the sale in 1834, a year after his father’s death. The deed does not indicate that it was Moses Jr., and confusion could arise because Jr.’s wife was named Mary, as was his mother. The death date for Moses, Sr. in 1833 is confirmed by several contemporary sources, and the deed is clearly dated December 1834.