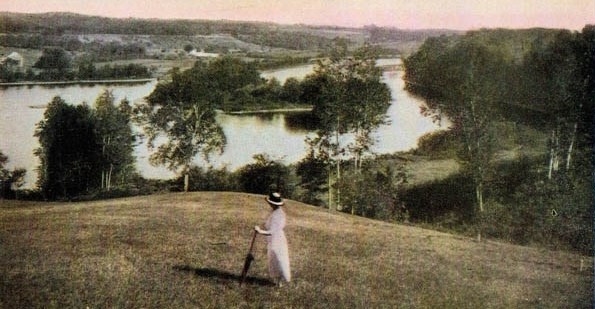 James Leon Williams was born in 1852 in the farmhouse across the road from where he built his magnificent summer residence Concord Haven, on the banks of the Kennebec. Ernest Walker, in Embden, Town of Yore, wrote that at Leon’s birth, the farm belonged to Leon’s maternal grandfather, Ralph Wells.  Leon was the eldest of ten children born to Calvin and Susan (Wells) Williams. He became famous as an innovative dentist and histologist, practicing in New York and London, where he provided services to the royal family. 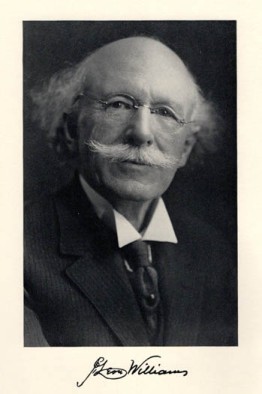 His paternal grandfather, Richard Williams, son of Embden’s Jacob and Joanna Williams, received a deed from William King in 1839 for the south half of Lot 20, Range 1 on the river in Concord, at the south line just above Ralph Wells. Leon’s father Calvin grew up there, and it was on those two farms that Leon spent his childhood.  He remained so attached to the memories that he bought the properties upon retirement from active practice, spending summers there and winters in Manhattan.

Through a series of sales, mortgages, and debt attachments, both the Williams and Wells farms came into the hands of the Coolidge family of Solon. Calvin Williams lost his farm to a debt judgement in 1867 and moved his family to Skowhegan, then on to settle in Vassalboro. Leon was very bright and soon caught the attention of local dentist and pharmacy owner E. J. Roberts. Dr. Roberts took him on as his apprentice and gave him practical training in dentistry. At the age of nineteen, he took over the dental practice when Dr. Roberts sold the pharmacy and moved to Augusta.

Leon married Alice P. Robinson of Vassalboro about 1872 and they had five children before her death in 1882: Lena B., Eugenia B., Harry Steadman, Percy Norman, and William P. The children were all under ten years old when their mother died. Daughter Lena died in 1888.

Leon married widow Carrie Estelle (Woods) Lunt, a native of Farmington, in New York in 1883. They moved to London several years later, where Dr. Williams set up his practice and found time to indulge in his hobbies of painting, photography, and anthropology. His wife Carrie died in London in 1908.

Daughter Eugenia joined her father in London and there married Siegfried Herkomer, shown as a boy below, son of Sir Hubert von Herkomer, an important and prolific artist, knighted in 1907. 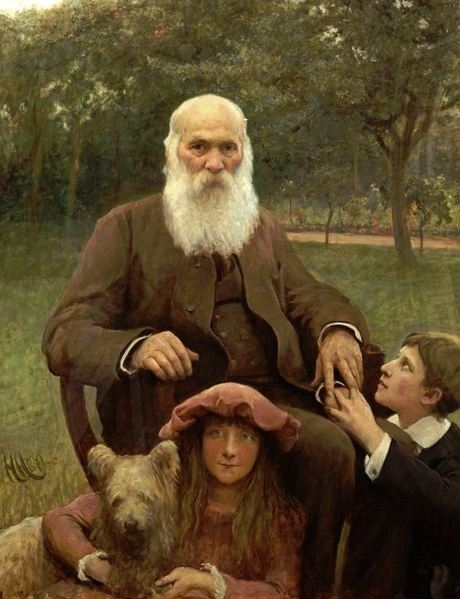 They had one child, Siegfried Hubert Leon Herkomer, honoring both grandfathers in his name. Eugenia died in England in 1905, leaving her three-year old son in the care of his father, who remarried. Dr. Williams erected a statue in memory of Eugenia near the fountain at the entrance to Concord Haven.

Dr. Williams at Concord Haven in front of the statue erected in memory of his daughter Eugenia.

There was a strong family interest in the arts. Dr. Williams, aside from his prominence in the field of dentistry, is also known for his photography and painting. His chief artistic work was The Home and Haunts of Shakespeare, a portfolio of 45 photogravure and 15 watercolor plates, published in London and New York in the 1890’s. His son, Dr. Percy Williams, a prominent orthodontist, was also a painter whose works were exhibited posthumously in Tucson. 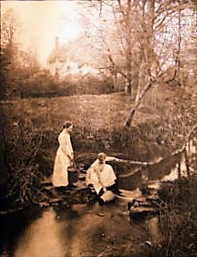 Shottery Brook, photogravure by James Leon Williams, from Home and Haunts of Shakespeare.

In 1915, Williams bought from Fred Coolidge of Solon, the land and farm that had been his childhood home. The properties, on the line between Concord and Embden, included land in both towns. Concord Haven was designed by Portland architect John Calvin Stevens and his son John Howard Stevens. It has been on the National Register of Historic Places since 1992. The house is visible, high on a knoll across the river, from the turnout just north of Solon village on Route 201.

Leon and his wife Ellen often entertained at Concord Haven. In 1931, they hosted a gathering to hear guest “Te Ata, a Chickasaw Indian [who] has collected some singularly beautiful examples of Indian folklore, and by music, dance and song now brings into our midst the spirit of the prairie, which is her ancestral home.” Leon’s son Percy and wife of Tucson were there as well. (read the article)

Gathering at Concord Haven, about 1931.

Ervin and Lucinda Moore of Bingham were in their circle of friends. Williams wrote a letter to Moore from his home in New York in 1928 discussing his latest reading and his own new writing. He feared the latter “will probably get me into all sorts of trouble.” He was referring to his article, “New Evidence of Man’s Relationship to the Anthropoid Apes,” in which he was critical of recent remarks by Prof. Henry Fairfield Osborn, President of the American Museum of Natural History. He expected negative reactions from many constituents writing, “I am likely to catch it front and rear.” Before he left London in 1913, Williams was associated with the discovery of The Piltdown Man, the remains of a skull that produced much excitement, but was later discovered to have been a hoax. He was called in to prepare a reconstruction of the jaw of the skull. He remained interested in anthropology, publishing the booklet The Prehistoric Basis for Modern Face Forms in 1920.

The letter to Moore was written in April, with Dr. Williams looking forward to returning to Maine soon. “We shall be glad to greet you. We stay here, but we really live only in Maine.”

Dr. Williams died in Manhattan on February 23, 1932 and is buried in Bingham Village Cemetery.