When local people speak of Bowtown, they commonly refer to the settlement on the west bank of the Kennebec, across from the north end of Caratunk and the south end of The Forks. There is a low flat intervale there, which was home to several generations of families. The neighborhood included a cluster of homes, barns, sheds, and even a little schoolhouse, fondly remembered by those who lived and worked there.

In fact, most of the houses in “Bowtown” were actually in Carrying Place Township (those will be discussed in a future article), but there was one homestead in that neighborhood that was within the boundary of Bowtown Township. It belonged to “T. Brown” in the 1860 map above.

The first record of a possession at lots #1 and #2 on the southern line of Bowtown Township, is a deed from James McGuire to Charles Benjamin Foster, dated August 1837. The deed conveys “the following said land situated in bow town, so called, said land bounded as follows, commencing in the Southeast corner of said bow town bounded by James Baker’s land on the South, and by the Kennebec northerly one hundred and sixty rods thence westerly so far that by a South course to Baker’s land. The lot may contain one hundred and sixty acres, meaning the two southeast lots, in said bow town.” 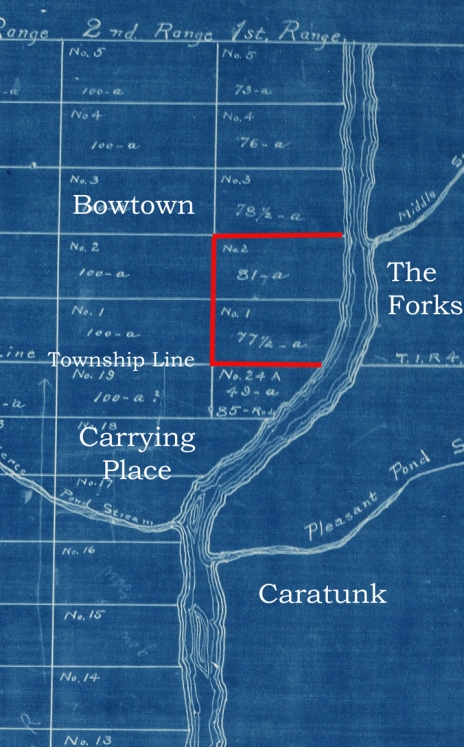 James McGuire was born about 1808 in County Fermanagh, Northern Ireland. His naturalization petition says that he came to The Forks in 1825, arriving by way of Quebec, Canada. A few years after his arrival, he married Desire Baker, daughter of Abner and Elizabeth (Young) Baker of Moscow, and they had three children.

Local historians have said that James McGuire left Maine to find gold, and was never heard from again. A recent publication by the Maine Genealogical Society, contains a list of men who left Maine bound for Australia in 1853. Many were from Somerset County, and James McGuire is among those listed from Norridgewock. His wife and children continued to live in the Upper Kennebec, and evidently heard nothing from him after his departure.

The next occupant on those southeast Bowtown lots may have been Thomas Brown, who is shown there on Chases’s 1860 map of Somerset County.*  Thomas married Harriet Baker Pierce, a daughter of Nathaniel Pierce. Her father was one of the first settlers in West Forks, and afterward lived in Carrying Place, at the southern end of the “Bowtown” settlement, near Pierce Stream. He is shown as “N. Pierce” in the 1860 map above.

Location of Thomas Brown’s home above the township line in Bowtown, as show on the 1860 map of Somerset County (Chase).

Thomas Brown died in 1870, and the property passed to his wife Harriet, who sold the upper lot (#2) to her son, Frank Brown, in 1874. Frank mortgaged the property to his mother, agreeing to pay for it in two years. Lot #1 was set off to another of Thomas and Harriet’s sons, Hannibal Brown, who lived there for a time before moving to California.

Frank Brown and his family moved to Aroostook County around 1876, at which time he sold Lot #2 to James A. Pooler of “Carrytunk.” James was the son of Lawrence and Rose (Graham) Pooler, who immigrated from Quebec to Somerset County by 1850, and were living in Caratunk in 1870. James Pooler is shown as the occupant of Lot #2 in the 1883 Colby Atlas of Somerset County.

James Pooler’s home in Bowtown, as shown on the 1883 Colby Atlas of Somerset County.

James Pooler sold Lot #2 to Hosea Bean of The Forks on May 19, 1900. The sale included all the farming implements then on the property. Hosea was a son of Jonathan and Mary Ann (Doyle) Bean of Pleasant Ridge, and later of The Forks.  Hosea, with his wife Sadie Laweryson, and his family, later moved to Bingham. He died there in 1925.

There are numerous descendants of these Bowtown families still living in the Upper Kennebec.

* Note: There is a man listed in the 1840 census in Bowtown as “Thomas McGuire,” whose identity is not certain. Another man named John Raney or Runey is also listed.